Are They Truly the Best Way To Profit From NFTs?

Alternative Assets Are Growing in Popularity. Is That a Good…

Times are tough for NFT investors. According to a report by Chainalysis, just 20.8% of NFT investors who flipped new NFTs on the secondary market ended up earning a profit.

However, if those investors were “whitelisted” first, their odds of turning a profit rose to 75.7%. Chainalysis concluded that “Whitelisting is key to success in trading newly-minted NFTs.”

But what is whitelisting? Why does it increase your odds of turning a profit by flipping NFTs? How do you get whitelisted, and when is it actually worth it?

What Are NFT Whitelists?

Whitelists are like the VIP list of an NFT project. And since whitelisted members typically get early access to new NFTs, getting whitelisted can be highly competitive.

That’s the short version — so let’s break everything down.

First, this is what a modern NFT project looks like. Sure, it might have a website or a Twitter page, but for the most part, NFT projects live on the online chat platform Discord.

Here, for example, is the Discord for Mutant Musks project — a sort of hybrid between Elon Musk and Bored Apes.

As you can see from the left-hand pane, NFT project Discords have separate channels for announcements, FAQs, a general chat, and more. And if you scroll down on the right-hand pane, you can see the almighty whitelist: 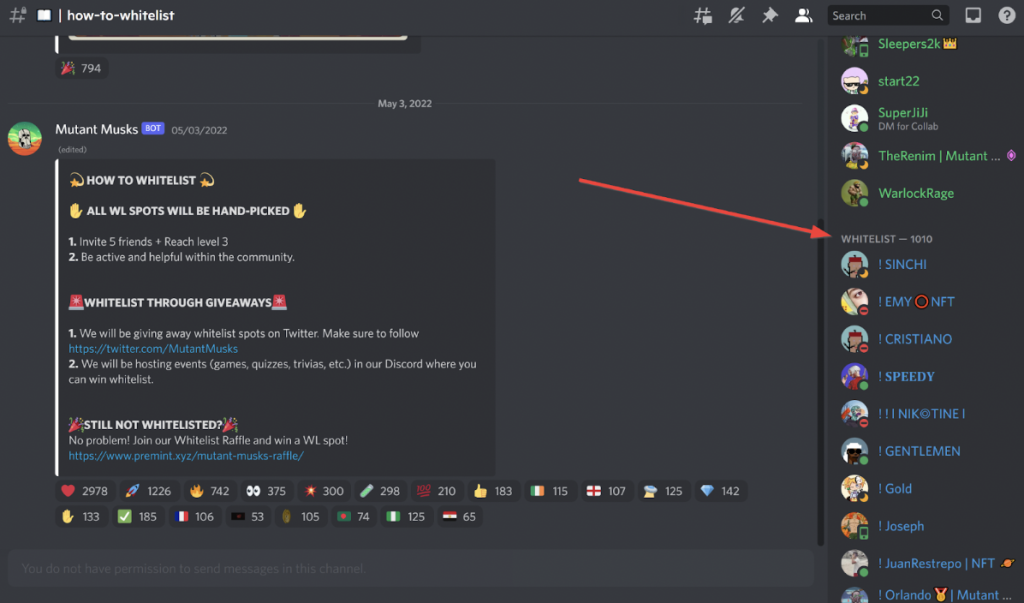 In the body of the above screenshot, you can see the project creators’ simple guide to getting whitelisted:

For a chance at getting chosen at random, you can also:

Mutant Musks’ whitelisting criteria are pretty simple, straightforward, and innocuous. And as you can see, the project creators have already whitelisted around 900 supporters out of 83,600 total.

(The whole “level 3” thing refers to an internal points system that ranks supporters based on their comments, posts, etc.)

So why bother getting on an NFT’s whitelist? Well, the project creators spell out the benefits clear as day: you’ll get VIP access to mints, giveaways, and more.

Again, sounds pretty innocuous, not unlike a Kickstarter for a local artist.

But here’s the kicker: there are two types of people who try to get on whitelists:

More on that in a bit. For now, let’s dive into why NFT projects have whitelists in the first place.

Why Do NFT Projects Have Whitelists?

Whitelists aren’t just arbitrary velvet ropes for self-aggrandizing NFT artists. Quite the opposite, they provide many benefits for creators and the community alike.  They can even contribute to project integrity and security.

Here are some of the reasons why more and more NFT artists are using whitelists:

Naturally, the #1 reason for NFT artists/creators to host a whitelist is to identify and reward their most loyal followers. There’s a practical element, too — as a project leader, you can ping your whitelist to solicit their help, guidance, opinion, and more.

With so many thousands of NFT projects floating around, it can be hard to keep followers engaged and interested for the weeks and months leading up to a mint (aka NFT release).

That’s why a typical whitelist requirement is to stay engaged in the community — log into the discord at least once a week, post in #general-chat, join prize giveaways, etc.

As illustrated by Mutant Musks, another widespread whitelist requirement is to invite three or five more folks to join the project Discord.

Now, if you know anything about pyramid schemes, that might set off a few alarm bells. It’s reminiscent of the moment on The Office when Michael Scott realizes he was suckered into one.

But the critical difference between Mutant Musks and Michael Scott’s pyramid scheme is that the former’s leaders aren’t asking for money. Just followers.

Even still, if you find the requirement icky on principle, whitelists probably aren’t for you.

Read more>>> How to Spot an NFT Scam

Another big issue facing NFT projects is the anonymity of their followers. Speaking as someone who’s run two successful Kickstarters, when folks donate to your cause, you typically get their full name and address so you can ship them their physical rewards.

But NFT creators only see their patrons as “Ape Jewel_rAZ” or “ikiBANANA.”

Sometimes it’s even less — just their public key, a string of code that functions as their crypto wallet address for sending NFTs.

As a result, it’s not uncommon for NFT projects to get flooded with bot accounts or a single person who controls 47 different accounts. These illicit players then hoard the NFTs for resale, essentially ruining the creator’s vision.

To prevent bots from snatching up every NFT, one of the main requirements of getting whitelisted is to prove that you’re human. You may have to enter a Captcha, set up two-step authentication, and more.

Finally, one of the more practical benefits of whitelists is to prevent “gas wars.” These happen when a significant NFT drop creates traffic on the Ethereum blockchain, raising gas fees (i.e. blockchain transaction fees) for everyone involved.

To keep traffic moving and the fees low, NFT creators will stagger their drop: the whitelist will get the NFTs on Monday, and the rest of the followers will form an orderly queue to get them throughout the rest of the week.

There you have it: whitelists exist to reward loyalty, filter out fake accounts, prevent blockchain traffic, and more.

Now, if you think about it, getting whitelisted shouldn’t be that difficult. Just prove that you’re human, log into Discord a few times, and maybe bring a few friends into the fold.

How hard can it be?

It turns out that getting whitelisted is highly competitive. As mentioned earlier, out of Mutant Musks’ 83,600 Discord members and nearly 130,000 Twitter followers, a mere 900 have made it to the whitelist.

That’s because most whitelists are hand-chosen by the project moderators and creators. Meeting the base requirements (engagement, adding followers, etc.) just qualifies you to get plucked, but it doesn’t mean that you will.

Plus, as projects develop and grow in popularity, getting whitelisted can get more challenging, and the requirements can get significantly more opaque. I’ve seen projects that require community members to post on social media daily for two weeks leading up to the mint just to qualify for the whitelist. And people do it.

Why Is Getting Whitelisted So Competitive?

Sometimes it’s because people just really, really love the project and will vigorously compete to show their enthusiasm. But more often than that, getting whitelisted is competitive because there’s money in it.

Think about the people who were first in line to get a highly-prized consumer good, whether it was a PlayStation 5, an NVIDIA GeForce RTX 3090 Ti graphics card, or even a Tickle-Me-Elmo doll during Christmas 1996. If they turned around and flipped it to a starving market, they’d see 100%, 200%, or even 400% returns.

Well, the same thing is happening in the NFT world. A lot of folks work their way onto whitelists so that they can flip/scalp their NFT rewards.

This revelation led to the widely-accepted belief that getting whitelisted was a surefire way to profit from NFTs. Soon, the “secret” was out: 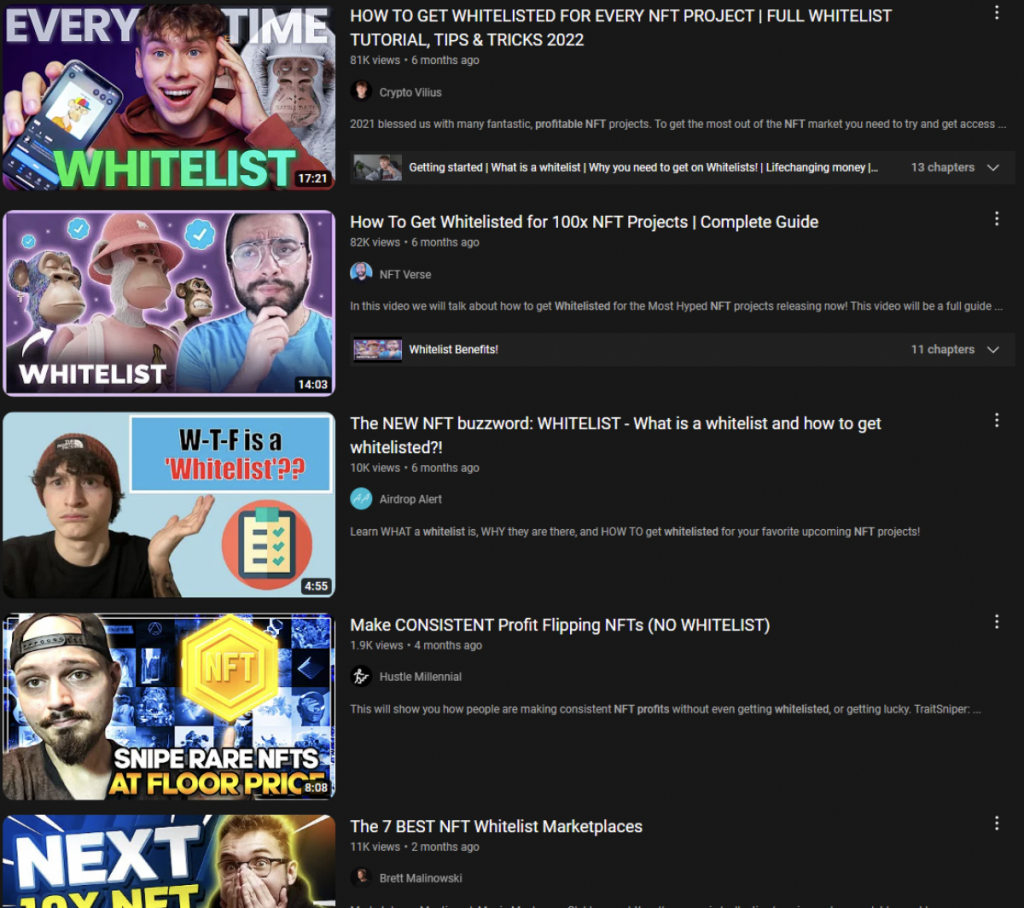 How Do You Spot a Whitelist Scam?

According to Chainalysis, in 2021, scamming revenue rose 82% to a record $7.8 billion worth of stolen crypto.

I hate to give them credit, but there are a lot of intelligent and successful scammers out there who are constantly innovating new ways to manipulate folks out of their crypto and NFTs. And whitelists give these bad actors a whole new playground to employ new tactics.

It’s safe to say scammers are lurking in nearly every NFT Discord. Here’s how you can spot them and their tactics:

Alrighty, so that covers how to avoid a scam, but how do you get onto a legit whitelist?

How Do You Get Onto a (Legit) Whitelist?

Getting whitelisted is simple in theory but difficult in practice. Every project is different, but it boils down to this:

Is It Worth the Effort To Get Whitelisted?

That depends on what motivates you and the outcome you seek. Subjectively, I’ll say this:

Are you already engaged with an NFT project and love going “the extra step” to bond with the creator? And do you want to get rewarded for your effort and engagement? If so, making the extra effort to get on the whitelist is probably worth it.

After all, in the creator’s eyes, you’re the ideal whitelist candidate: passionate, supportive, and willing to put in a little extra work to make the project successful.

If you want to flip NFTs for profit, I recommend against trying to get whitelisted for at least four reasons:

Even when NFT scalping works as planned, it benefits no one other than you — not the creator, community, or the overall economy. Plus, creators have banned scalpers from future projects.

And overall, it’s just not particularly ethical to worm your way into an artist’s trusted inner circle of fans so that you can instantly flip their work for profit and disappear.

There are much easier and more dignified ways to make money.

Overall, NFT whitelists are a force for good. They improve project integrity, generate hype, and enable an artist to connect with their most loyal supporters.

And while getting on a whitelist may improve your chances of profiting from NFTs, it’s not worth the opportunity cost of faking engagement for days, weeks, or months.

But if you are already authentically engaged with an NFT artist and their community, why not go the extra step and get rewarded?

Alternative Assets Are Growing in Popularity. Is That a Good Thing?